I intended to publish this three weeks ago:

I have always wanted to write what I have been up to since my graduation last September, but I did not know where to start.

Me and Alex have been blessed with a steady self-initiated work that pays for our living. We do not work fixed hours but we work everyday, including every weekend and every holiday, and have been doing so for years. Despite that, I often see myself an unemployed rather than self-employed.

I have always assumed that graduation was a marker of the end of a chapter and the start of another one. Now I realise that I have actually started a new chapter well before I graduated. It is now a continuation of what I have planned and started earlier.

I hope what I’ve written make some sense and this is a short introduction to my updates.

Today, I am very grateful for having the opportunity to also publish what I have written and saved as draft a month ago. I wanted to wait for the right time:

It has been a difficult

and uncertain journey for Alex and me in the past few months; to go against the current, to stay out of our comfort zone and to live the challenge. I am glad that our determination, persistence and endurance have slowly showed some rewards. We are a step nearer to realise our dreams.

I am thankful for two main quotes that we lived by and kept us going through the rough journey:

I have to admit that there were many meltdown moments where I completely gave up on myself, but I am grateful that Alex and I have chosen to stay strong together, to brave through the tough situation.

Before we headed to Naples, our friend in Rome advised us to be extra careful.

We had interesting experiences in Naples. From one perspective, Naples is an interestingly different Europe city, compared to others we have visited. Most Europe cities share some generic (but nice) elements – public squares, cathedrals, paved pedestrian streets, well-planned transport network and parks. Naples wasn’t like that, and I don’t know if we will ever have the chance to visit Southern Italy again. (Never say never)

We arrived at Naples train station and went on out “extra alert” mode. With a map, we worked out the shortest route to our hotel. Based on normal walking speed, it should take us approximately 20 minutes. Because of all our luggage, we added another 10 minutes on top of that (a big luggage bag, a medium luggage bag, a backpack and a duffel bag— I can’t learn how to travel light!).

As we were walking, we often felt people eyeing us. They seemed jobless and eyeing respectable citizens seemed to be their past time. Perhaps we were one of the only few Asian tourists there. A man even stood in front of us and took photos of us with his mobile phone, without our permission, while we were waiting for the traffic light at a junction. It was a super weird experience and we wondered briefly if he was actually planning a mug on us. It didn’t happen. 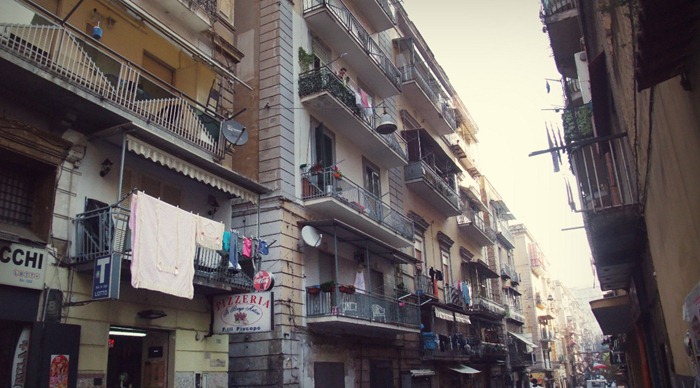 We passed by what seemed to be the local Chinatown, with many Chinese and Vietnamese businesses. It was easily recognisable due to red lanterns hanging outside on the streets. They sold groceries, household items (the plastic ones – practical to use without aesthetic concerns, those seen in Malaysian pasar malams) and mobile accessories. With the clothes hung to dry at balconies of the flats above and the humid weather, it was a scene right out of a Malaysian street. 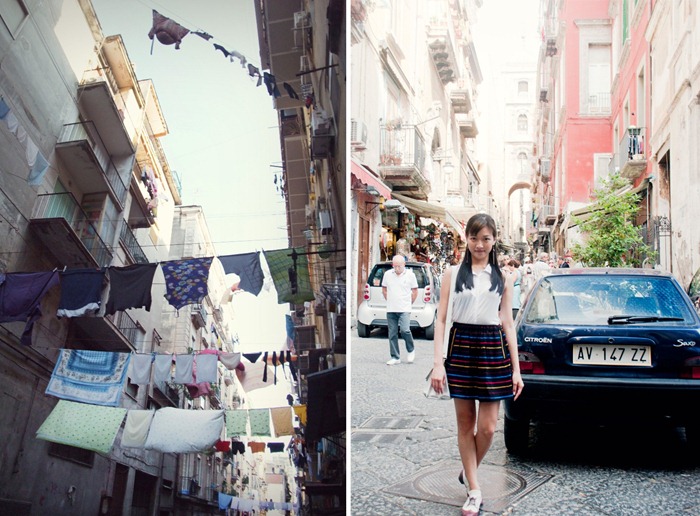 All along we came across many big piles of rubbish. I found out that was what Naples was infamous for. The mafia was in charge of the city’s waste disposal, so it’s probably not so surprising that they didn’t bother to do a good job of it. My personal tour guide (Alex, who else) told me this.

The expected 30 minutes walk ended up taking us 50 minutes! What we didn’t notice from looking at the map was that most of the route involved a narrow lane with no pedestrian pavement and one-way traffic. We had to step aside every few seconds to give way for all the traffic coming from the opposite direction, because they certainly didn’t seem to care about us. The street was cobblestoned and I was amazed at the durability of our luggage’s wheels, which survived in perfect condition.

When we finally arrived at our hotel, we realised that there was a main road with a huge pedestrian pavement located just one block parallel to the narrow one-way lane we took. It was longer in terms of distance, but later journeys to and fro our hotel took half the time. Neapolitan drivers are aggressive and seemed to have a constant finger on their motorcycle honks. Thanks to our Malaysian driving instincts, we easily managed to deal with the crazy traffic though. Not so much different to Penangites, the Neapolitans…

In the beginning, we avoided using the DSLR to refrain from looking too touristy and mostly because it just seemed to weird and out-of-place to do so. By the third day we became thoroughly accustomed to the environment, it being not too different from seedier parts of KL, and Alex started snapping away on the DSLR anyway.

All in all, the trip was worth it, maybe even for the pizza alone! I can truly say that I have never eaten any pizza as good as the ones in Naples. 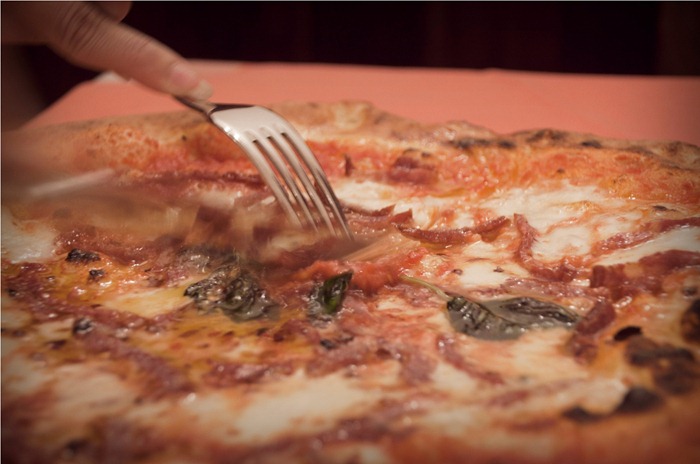 I stumbled upon a flash designers’ sale advert on Timeout London one day. I didn’t plan to buy anything, but Alex and I went anyway. I have always wanted to experience the hustle and bustle of designers sale, as portrayed in the Shopaholic series.

The sale store was hidden away in a small side street near Bond Street. There was a girl, dressed very nicely, walking up and down the street, asking the passers-by if they were going to the sale and giving directions for it. We also saw some flyers pasted on the entrance door featuring some well-known brands such as Fendi, Chloe, Miu Miu, D&G, Prada etc, presumably to lure passers-by in.

Unfortunately, the sale room was very quiet. Featured brands on the ads were no where found except for a few ugly shoes in unpopular sizes. I found a decent sleeveless blue satin top with a big fat 60% discount tag, but I still managed to resist myself from falling into the price slash trap. On a second/third thought, it should not cost that much even after reduction. My mum must be very happy reading this!

To tell the truth, this kind of gimmick was expected and we didn’t really expect to see anything worthwhile. Still, it was nice to tick off one item off my bucket list (to visit a flash designers’ sale in London). 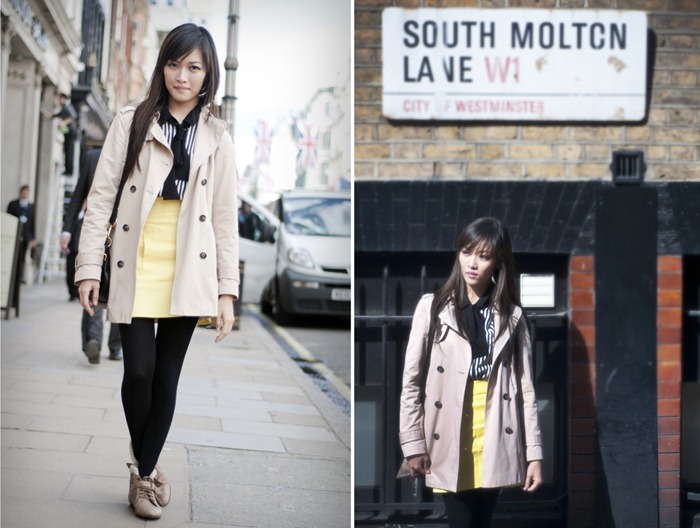 We then went to Hermes Leather Forever exhibition in the Royal Academy of Arts. Aside from showcasing the history of Hermes over the years, there were also real-life artisans working in a replica studio showing the process of  making a Hermes bag. One of them has been working on the exquisite bags for nearly 20 years. That’s how the Hermes bags were made, which explains the high prices and long waiting list. Being able to touch the different varieties of raw leathers on display would have to satisfy me until I can afford one in the future.